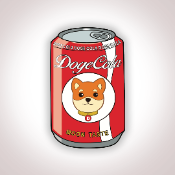 Do you remember when, in 2015, Billy Marcus sold his DogeCoins to buy a $ 10,000 used Honda Civic and Jackson Palmer stopped following the project for reasons not entirely clear?

What would you think if I told you that the guys of DogeCoin are not only two?

What if another one is me?

After having been completely dismissed from the idea in 2013, I reactivated my twitter account and I decided to take my cut back by joining DOGE with one of the most famous drinks in the world, giving life to the craziest idea in the whole crypto reality.

Get comfortable, because this is only the beginning.

DogeCola has no news for the moment !

Congratulations! You have successfully voted for DogeCola.