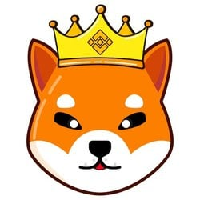 
What is KING SHIBA ?

King Shiba is the newest Shiba coin which aims to overtake and dominate the current Shiba Inu, Doge, and Floki coins. The King will rise and rightfully take his position at the top.

King Shiba is developed to take on the leadership role. King Shiba is inspired by the old traditional ways of ruling the community when the kings worked for the people and the common folk.

King Shiba will add liquidity to UniSwap, create an ETH bridge, and benefit from working with a broader audience to their community. It will be the first cross-chain bridge letting the users on King Shiba's blockchain interact with the Ethereum blockchain.

King Shiba allows EverOwn to manage the liquidity/contract with the community's approval and voting assistant, allowing the developers to make changes accordingly.

KING SHIBA has no news for the moment !

Congratulations! You have successfully voted for KING SHIBA.