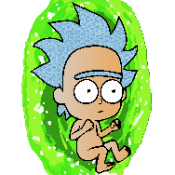 Stealth launched less than 24h ago

While flying through space, Rick and Morty collide with an interstellar insect which smears on the windshield; when Rick attempts to clean it, the windshield becomes even more smeared, and Rick decides to search for washer fluid on a nearby planet. Upon arriving, Rick discovers that the citizens of the planet sustain their peaceful way of life by engaging in open warfare on one night every year; upon discovering that the aforementioned night (which the citizens call "The Festival") is that very evening, Rick pleasantly proposes to Morty that they stay and observe the murderous rite.

During The Festival, Rick got hit with a dangerous Baby pistol, that transformed him into a baby. Even the key to their spaceship, which was in Ricks pocket, turned into a little baby key. Now Rick and Morty are stuck on that planet with no way to get out. Ricks wallet has also turned into BabyRick wallet, but he forgot to bring some money with him. and the only way for

BabyRick has no news for the moment !

Congratulations! You have successfully voted for BabyRick.